It has long been my dream to live on the water. That dream has come true and every single day that I wake up and look out over my little piece of the sea, I give thanks. Another dream has been to own a boat. Anyone that has been around me when a boat ride is being offered knows I am the first one to put up my hand and yell ”PICK ME!!” I can think of nothing I love more than being on the water in a boat, well besides a nice glass of wine, but I digress.

So that dream is also coming true and as I type I am still rocking back & forth after spending a day on the water yesterday doing a sea trial on a boat we are hoping to buy. Shopping for a boat is a process, we have been looking for years, walking up and down the docks searching, comparing, questioning, researching…hoping. Then one day this boat came along and if all goes well, she will be ours very soon. We both knew the minute we stepped on, and we looked at each other as if to say” Can you believe it? It’s the boat”. Fingers crossed.

For me, one of the cool things about being on a boat is how different the world looks. Suddenly one can see things from a vantage point that is only seen by a few others. The view from the road is entirely different than the view from the water and it is wonderful to be able to experience both.

One of the first places I fell in love with when visiting the island many years ago is Chrome Island. This is a fabulous little island with a rich maritime history located off the south tip of Denman Island. I remember the first time I saw it, I was hiking with some friends in Boyle Point Park on Denman, and at the end of the path was a lookout spot. As I came over the small hill and looked out over the water, there it was. This amazing little island that houses one of the last remaining “manned“ lighthouses on the coast. It looked like something out of a storybook, so tidy, red & white, green lawn. In fact the day I was there, the lighthouse keeper was mowing the lawn. Here is a bit of history I found. 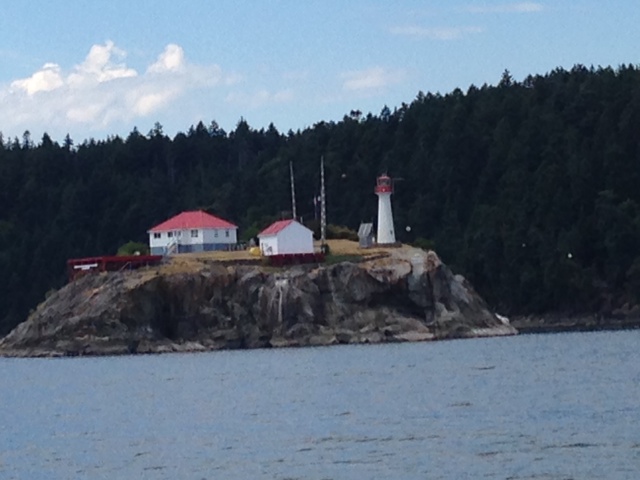 “Nestled in the northwest corner of the Strait of Georgia, Chrome Island Lighthouse marks the southern entrance to Baynes Sound, bounded by Vancouver Island and Denman Island. The island was first labeled Yellow Rock on navigational maps around 1860, in honor of its unusual light-colored sandstone that glows golden in the setting sun. On that sandstone, pre-historic people carved curious shapes and figures, the widest variety of petroglyphs to be found on the West Coast. Some scholars speculate that these drawings record battles of the Pentlatch people. Others hypothesize they hold some religious meaning, perhaps depicting offerings to the spirit Gods.

Yellow Rock was renamed Chrome Island around 1940 to lessen confusion with Yellow Island in Discovery Passage. In 2000, an archeological study was carried out on the island, and as result it is now considered a protected archeological site featuring petroglyphs, human bones, and a shell midden. Though the station has changed over the years, Chrome Island Light Station faces a storm of its own, as the Canadian Coast Guard has repeatedly threatened to de-staff it. Public outcry from mariners, floatplane operators, and those dependent on the vigilant work of the light keepers has so far kept this from occurring.”

So yesterday as I went past Chrome Island by water, I had a chance to look at this magical place from a different view. And as a new boater, I am grateful that this little gem is still there after all these years, keeping watch over me and all the other boats.

Fall is my favourite!

Fall. Yes, let the record stand I have already written about fall being my favourite…

It’s another brilliant day here on Baynes Sound. The sun is shining brightly, the birds have…

It has been another amazing week here on Vancouver Island. This hot weather is both…

Recent Posts
Archives
Categories
Contact us today to book your perfect Vancouver Island experience or with any questions you may have.
Contact
Web Design by Siren Consulting Firm © 2022